You never know when something might spark their interest. But one thing is for sure, something wondrous that Jack discovers on his own is far more magical and engaging than anything I could prepare for him.

One afternoon we were playing in the backyard, Jack was climbing on one of the stumps, he lost his footing, slipped and as he fell a large piece of bark came away from the stump. There were bugs everywhere, hundreds of them, ‘Mummy! Look what I FOUND!’ Jack yelled excitedly.

Moments like these happen all the time; something new and interesting catches Jack’s eye, but it took me a long time to recognise these experiences as opportunities to explore further, an opportunity for a project. Honestly I think I missed a lot of them, a lot of oh yeah, that is interesting and then the next day back to something I had planned, moving on without a second thought. It took me a while to learn to listen to Jack and from there, how to speak with him in a way that would encourage this fascination and not stifle it with all the answers. 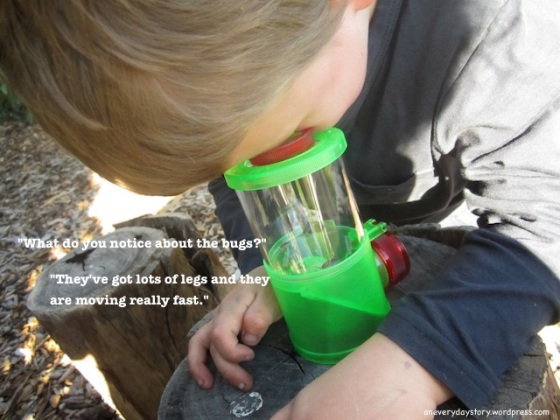 This was an opportunity to dig deeper, to ask some questions and look for answers. In her book, Project-based Homeschooling: Mentoring Self-directed Learners, Lori says, don’t give them the answer, always start with a question,

‘Where do you think we could learn more?’ ‘What do you notice happening here?’

and then always follow through with their suggestions. In this case, Jack wanted to know the name of the bugs, I didn’t know, so I asked him, ‘Where do you think we could find out?’ He suggested we might find the answer in a book. So off we went to find a book.

When starting a project, and in fact the entire way through, it’s important to continually revisit things, as Lori says, lay down multiple layers of learning, rather than doing activity after activity. With the bugs, we returned to the stump the next day only to find most of them had moved on. Jack was disappointed.

I think, before, I would have either said, oh well…here let’s do this (activity), or given him a reason for why the bugs weren’t there, or maybe even suggested we look for more, but trying to remember what Lori had written about listening to children and allowing them to take the lead, I waited, for what seemed like ages, until Jack said, ‘Mummy, these bugs are gone. Let’s find some more.’

It’s hard to not jump in with answers or suggestions, I still need to consciously remind myself that this is Jack’s learning journey; he leads the way. 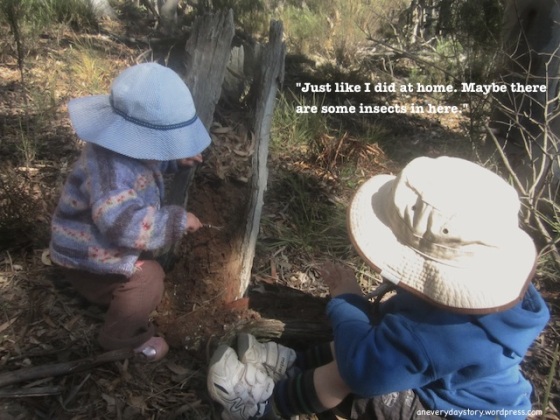 I probably would have suggested a bush walk anyway, but would Jack have been as enthusiastic about the walk if he hadn’t suggested it? He really enjoys bush walks but in this case he was entirely focused on finding more insects. Would he have been this interested had I suggested the walk? Or would he have just explored more freely like he usually does? Hard to say, but in this instance he had a definite purpose of finding more insects. 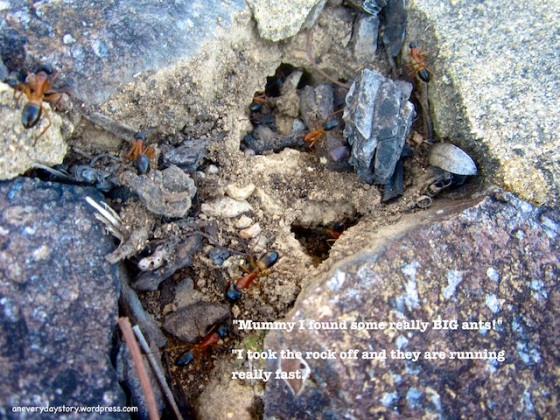 The evening after the bush walk I put his journal, the book we originally read about insects, an ant figurine, his clipboard and a pencil on Jack’s bedside table. I’ve found journal writing to be a really engaging way for Jack to recall his experiences and bring his ideas together. Jack will write and draw in his journal. I label his drawings and write a description of the journal entry up the top. I have some word cards with project-related words (ant, antenna, leg, bug, dirt etc.) which Jack can use to help him label his drawings.

By talking about what we did that day, it helps Jack to connect his learning. We saw this today…or we went to …. today or I enjoyed…with you today, with his journal nearby is usually enough to inspire him to talk about his experiences and draw them in his journal. The journal can then be used as inspiration for the next day;

Last night you drew this picture of an ant in your journal….(maybe with a simple clay provocation on the table or some loose materials for modelling)

or just waiting to see how Jack is inspired, and follow his suggestions.

I am learning to listen to Jack, hear his suggestions, value them, and follow through. And honestly, once you get the hang of it, of recognising their interests and hearing what they say, it is so much easier and less stressful than trying to think up new one-off activities all the time. So far Jack has wanted to use his bug viewer several times, take a few bush walks, return to an ants’ nest in our neighbour’s yard, draw in his journal and play with his insect figurines, nothing too complicated there, but all Jack’s suggestions and all wonderful experiences.

16 thoughts on “The Bugs Project: Learning to Listen and Talk with Jack” 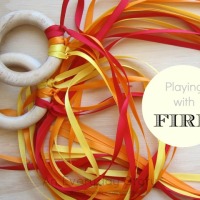