I used to teach literacy to high school students who had somehow fallen through the gaps. Teenagers who couldn’t read ‘blue’ or ‘chair’, who would pour all their effort into reading a sentence and yet were unable to tell me the meaning, or even repeat the sentence back to me. These students wanted so desperately to understand but were petrified of putting themselves out there, to ask for help, for fear of being ridiculed or pitied. They had decided they were stupid. After all, they had struggled for so many years, they must be. How did this happen?

Then I saw a documentary a while back about the lost magic of childhood. In it a group of researchers shared their findings of a 25 year study which showed that children who were pushed into early literacy (aged 2-4) performed no better than their classmates at high school and interestingly were more likely to resist school and study having developed a negative approach to learning. By pushed they meant structured literacy lessons/activities often using worksheets and flashcards.

So how do you know?

Well, I think there is a difference between an interest in letters and a readiness for writing. Montessori uses a series of manipulatives to teach letters and letter formation long before the child picks up a pencil. Reggio uses the environment to stimulate and encourage language and literacy through exposure, documentation and reflection.

And what about physically? Hand and wrist muscles? Coordination? Core strength? I asked Jack’s OT whether she thought Jack was ready for writing. She gave me some very helpful points to consider.

This is what she said:

1: Most importantly, has a hand preference been determined? Does Jack have a noticeable ‘precision’ hand and a ‘helper’ hand?

No. After a few days of observations in different situations – eating, cutting, drawing, brushing his teeth – Jack has not yet determined a hand preference. He tends to favour his left hand but not consistently.

She suggested I put things – pens, cutlery, brushes etc. – in his midline (in front of him) rather than to one side. This will encourage him to use his preferred hand when reaching.

She also suggested we continue with the bilateral coordination activities – using both hands at the same time. This will help Jack to determine which is his precision hand and which is his helper hand.

2: Pencil Grip – What does his pencil grip look like? 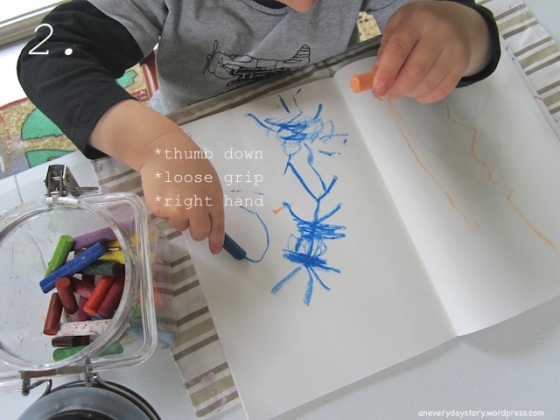 She suggested I wait until I notice him using a loose grip on the pencil, ideally with his thumb pointing down. This suggests that he has enough hand, finger and wrist strength as well as shoulder stability to manipulate a pencil efficiently. If I introduce writing prematurely, Jack can establish bad habits as his body tries to compensate for his lack of muscle strength and stability.

She also suggested we continue with lots of finger isolation activities (using fingers individually) and hand-strengthening activities like playdough and clay.

No. Jack can draw circles but his lines don’t nearly connect. He can also draw lines but they tend to drift off.

Jack tends to draw what things do, so a volcano erupting, a rocket taking off, a person playing drums, as opposed to what things look like. So often his drawings simply look like scribbles. You’ll also notice up in the very top photo, that when he is drawing pictures, he is quite focussed but his movements are still rather quick. Jack has only recently made the developmental step to drawing people with bodies, let alone the more precise control needed for letter formation.

She suggested that we continue with lots of finger activities, like finger painting, that will allow him to develop some control over his marks without introducing the pencil with the intention of forming letters.

So it would seem that even though Jack has started to show an interest in letters he is not ready for writing. I guess there are still many other ways to encourage language without writing letters.

For now we will continue to work with the sandpaper letters and the sand tray. I’ll encourage him to paint and draw freely. I’ll keep out our alphabet puzzles and manipulatives. We’ll talk about letters and words in our home and our lives. But no, I don’t think he his ready for writing.

13 thoughts on “Is He Ready? – Prewriting and Writing Readiness”